Facebook continues to grow as the go-to social media for many schools and districts. Some are using it more than others, but recent enhancements made by Facebook are making it an even more viable – if not a necessary – communications tool to increase school community engagement.

In its continuing efforts to further personalize the user experience, the Facebook programmers at the social media giant (FB owns Instagram, WhatsApp and dozens of other companies) have introduced some new features that you see and one you don’t. The three major improvements to Facebook for the 20-16-17 school year reflect just how users prefer to engage the content that’s most important to them.

Two of the items I want to quickly review have to do with video. The saying popularized by the music group The Buggles, Video Killed the Radio Star comes to mind. While video isn’t necessarily replacing anything these days, it’s become the medium more people are preferring to take in information. Watching video clips and (in some cases where more content is necessary to convey) longer videos are how more and more people prefer to gather the news and info most useful to them.

Facebook’s video enhancements provide the functionality that can become a great way for your school community to tune into your school.

In a recent survey conducted by the Campus Suite Academy, 40 percent of the school communicators polled rated their own Facebook activity good, but still underutilized, while only 16% felt they were successful with their FB and engaging a lot;74 percent of schools self assessment says Facebook is underutilized.

These figures could explain why the Campus Suite Academy’s recent Facebook Webinar, which you can view here, was so well attended. School social media expert Andrea Gribble of socialschoo.edu provided tips on how schools can better utilize Facebook in their communications mix.

Perhaps the coolest thing to come along in awhile is the new Facebook ‘Live’ feature.

Introduced in the spring of 2016, Live does just what it says: making it possible to broadcast live right from your phone or tablet. Now you can stream live right from within Facebook for real-time broadcasts. All your school’s Facebook friends can tune in to any event your find broadcast worthy.

As simple – if not simpler – as posting a message or image, Facebook live is great way to bring people into the action, whether it’s a look-in at a school event, something more planned out, or even some routine events like a school board or PTO meeting. The possibilities are endless.

Take a swing at broadcasting a live event. Be sure to do some planning first. Test it to make sure sound and lighting quality are acceptable. Most of the mobile devices have great video cameras, but be sure the sound is captured.

They aim to be the next Youtube, sources say. Not only are Facebook live events automatically dropped onto your FB page (see the video tab), but you can load up any video you create to build a library of videos.

For game highlights, event promotion, news bursts, human interest look-ins – the list of possibilities for using video is as great as the number of stories themselves percolating around your school.

TIP: Remember, our attention spans continue to shrivel, so keep your videos short. For longer videos (e.g., complete games, school plays, to debates, board meetings and superintendent messages) create a short preview, then link it to the longer form. Long videos, Better connect with your school community.

The third and final recent development at Facebook is not nearly as evident as their video enhancements, but nonetheless very important. Earlier this year, the Facebook developers introduced a new algorithm that is responsible for what and when content finds its way to Facebook pages.

Now if you don’t know an algorithm from a bio-rhythm or you thought algorithm was a South American dance beat, you’re like me. All you need to know is that Facebook’s new formula is all about improving the quality of content that shows up on your newsfeed.

Your takeaway as a school communicator is that you need to be get or continue to be on the radar of parents, staff, students, formers students and friends of you school to keep in front of them.

Q&A from the Facebook for Schools: What's New Webinar 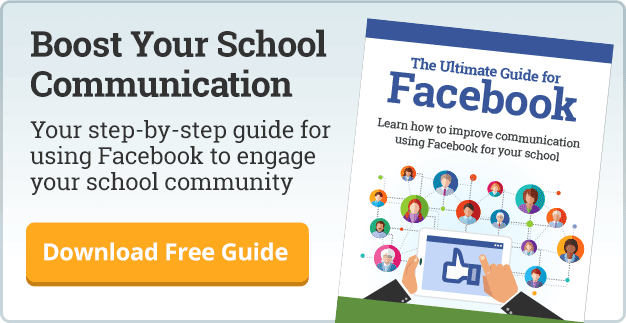