How to Handle Negative Comments on School Social Media

How would you feel if your city’s mayor took over managing your school's social media? Well, believe it or not, that could be happening very soon in one school district, due to some mishandling of negative social media comments.

As recently reported in the Chicago Tribune, city officials are now debating who’s going to be in charge of the Portage Township Schools’ social media following some disparaging comments on Facebook about their superintendent.

All this is very sad. Sad that some knucklehead would take to social media to besmirch a school official, sad that others would pile on, sad that the school risks losing control of its own communications, and sadder still that this all could've been prevented had the matter been addressed properly in the first place.

When your school's social media conversation gets going, it’s a beautiful thing. What isn’t beautiful, however, is when someone decides to go negative on social media and puts your school or a school official in a not-so-favorable light.

When the rare occasional negative comment does arise, there are some things to keep in mind. How your school responds to negative social media comments reflects on the public’s perception of your responsiveness, transparency and professionalism.

I’ve outlined the following steps to use to handle negative comments on your school’s social media channels, and some “dos and don’ts” to always keep in mind.

A negative comment doesn’t have to turn out negative in the end. If valid, it can help you both recognize and rectify a problem with your school. What’s more, it gives you the opportunity to clarify situations and turn that negative into a positive by showing you care enough to engage and build the relationship. Keep that in mind.

That being said, not all negative comments are valid, some aren't really all that negative, but all of them need to be dealt with – as is the case with Portage Township Schools.

Map out a response plan

One of the first things you should do when setting up any social media account at your school is to create a process for managing the comments. This process, of course, will also apply – for the most part – to all the positive comments, likes, shares and retweets being generated by your community.

Being prepared to respond to the inevitable negative comment and planning for it will help you sleep at night. A simple plan will also go a long way to assuage your superintendent, board members and anyone who might be concerned that the school or district could be ‘blindsided’ by negative comments on social media. Preparedness reflects well on everyone.

An unattended negative comment can spread quickly if not addressed, and a negative comment cannot be addressed until it is discovered through a diligent monitoring discipline. Whether you’re just getting started with using social media for your school, or have a more developed social media program with lots of followers and friends, it’s critical that you stay on top of your accounts by closely monitoring your accounts several times throughout the day.

You should set all of your social media accounts to automatically notify you when someone comments or responds. In addition, you may want to look into getting some help with your monitoring, especially when your social media activity really starts to get rolling. Two of the popular social media monitoring apps are Hootsuite and Buffer. These apps and others like them provide additional benefits by centralizing the management of all your social media content. Apps like these also help you monitor what anyone is saying about your school in social media.

With everyone these days hypersensitive – and for good reason – to bullyism and downright rude social media behavior, most extreme negative comments are policed rigidly and swiftly. If one of your students decides to go off on a teacher and posts some negative comments on your school Facebook page, it ought to be sniffed out and dealt with in short order.

On the other hand, there are degrees to “negative” comments, and most are not going to be the extreme, inappropriate ones.

It’s important that you understand what kind of comment you’re dealing with before you respond to it. Maybe your website’s school calendar is on the fritz and needs immediate attention, or maybe some post just needs some clarification. Again, most of the negative feedback you will encounter won’t be disgruntled commenters.

At a recent school public relations symposium where the Campus Suite Academy presented a program on using social media in schools, the issue of negative comments came up. Interestingly enough, the biggest recurring negative comment one district had to wrestle with had to do why the district was so quick to close school during harsh weather. Here’s a case where the direct response would be something along the lines of “safety of students and staff is top priority.” Canceling school, however, as you well know, has all sorts of ramifications that could be elaborated upon in follow-up comments from the district.

Start keeping a digital record of all your comments. This will not only help you cover your bases legally, but it can help you respond consistently and develop your school staff in so doing.

It’s a good idea to chronicle the comments you get by grabbing a screen capture of the comment in the event the user who posted it, or in the rarer case, you, delete the comment. Tinytake and Awesome Screenshot, are just a couple of the popular free apps you can use to take screenshot captures of your comments. Awesome App is available as an extension for all of the popular web browsers.

Note: whenever possible, try to keep a negative post up (except, of course, when it’s inappropriate), and use positive replies to rectify the situation, in effect ‘burying’ the negative comment with good ones of your own and others.

For record keeping, create a “disgruntled” folder somewhere, if you haven’t already, and file your negative comments there. Use them as learning opportunities for your staff. Anyone in your district who’s involved with posting or managing social media content should see or read the comments and track how you responded.

When a negative comment does make its way onto one of your social media channels, school blog or website, it’s important to create a centralized document that logs it. This is especially important when a situation ‘escalates’ or you have others 'piling' on a negative comment.

I suggest a simple spreadsheet document that shows the following:

Having these steps mapped out shows that you recognized that a problem exists, is worth investigating, was in fact investigated and by whom, and an official school response was made by the designated individual. It also helps in the event the dialogue somehow or at some later time continues, and further handling is required on the part of the school. This trail of action helps all school officials involved and/or responsible on the same page in handling negative comments.

The dos and don'ts on how to handle negative comments on school social media:

Do stay on top of it. Social media is very public and pretty much a 24/7 phenomenon. Diligence is required. Check your accounts at least daily if not more frequently. Weekends too.

Do acknowledge all comments. When a negative comment does rear its ugly head, confirm with whoever posted it that you received it. Be direct. Try to soften it. Handle inappropriate comments offline.

Do nip it in the bud. Put your communications skills to the test by responding quickly with a concise, well-thought-out comment that reflects positively on the school.

Do try to see their side. Put yourself in the commenter’s place and make sure your response is the kind you’d like to get if you were in their shoes.

Don’t ignore. What’s worse than negative comments is neglecting or ignoring them. Negative comments that go unattended can fester and ultimately reflect poorly on your school.

Don’t be defensive. Do not take a defensive posture when responding to a negative comment.

Don’t escalate. Don’t protract the negativity in an online argument for the world to see. People who take the time to comment negatively on social media can sometimes be looking for a battle. Be a de-escalator.

Don’t patronize. It’s easy to see through comments that look down on someone or are in the least bit condescending.

Remember, discussion and dialogue ought to be part of your school’s communications goals, so do all you can to encourage comments.

Make it clear to anyone using your social media channels that you welcome their comments – positive or negative – but they must be fair and must play by the rules that you can set. By having a clear public policy on how your school handles comments, you can head off some of the negative comments. Create a comment policy, post it on your school website, blog, and link it to all your social media accounts.

You can even make your comment policy part of your User Acceptance Guide. I like how Jennifer DiBella at Stevenson High School created a social media ‘registration form’ on her website that gets agreement for anyone participating in the district’s social media.

Respecting everyone, creating a safe space free of rude and unfair comments, and making it clear that comments will be moderated will go a long way in preventing negative comments.

Put a plan together. Be diligent with monitoring all comments, and never ignore them. Respond quickly, taking the harsh ones offline, and doing your best to be professional in how you comment back. 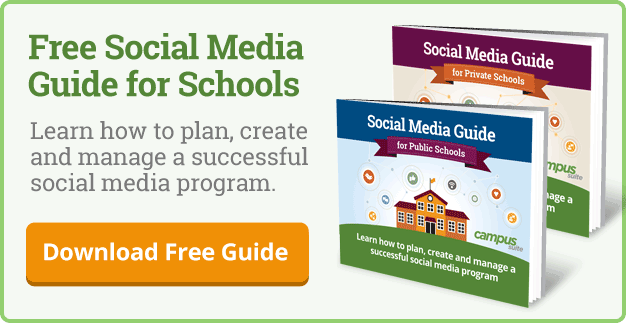