4 ways to use Twitter for schools to increase engagement

Have you been reluctant to using Twitter for your school? Maybe you’ve tried it in the past and just haven’t gotten the hang of it? Now may be a good time to revisit the idea. It’s increasingly likely that your students, parents, faculty, and even interested community members are on Twitter, which makes it an effective way to increase engagement and expedite communication.

Twitter continues to be one of the fastest-growing social media platforms. As of 2016, some 68 million Twitter accounts in the U.S. alone (close to 400 million worldwide.) It's projected by 2020, 35 percent of the U.S. population will have a Twitter account.

More importantly, these folks will be depending on their Twitter feeds to get the info they want. Your school needs to be on board.

Some of the hurdles that many educators face on Twitter is deciding who should be tweeting and what exactly to tweet about. What’s relevant? What do your students and parents want to hear from you? How do you tweet in such a way that you don’t get lost in the non-stop Twitter feed?

These are legitimate questions, but don’t worry: the content will come. Think of all the great news and activity you can share with your audiences. Twitter’s just another way – and a popular one, at that – to spread the word. The biggest hurdle for many schools is first seeing the value in jumping in the Twitter world and figuring out how to flip the “ON” switch. I’m here to tell you why and how.

There are four distinct areas in which schools are using Twitter and seeing results. Think about how you could use Twitter to improve engagement in these areas.

1. Enhance student engagement in the classroom.

Many people assume that Twitter is only for sharing news or making announcements. While it is good for those purposes, many teachers are finding that it’s also a highly-effective learning tool. It provides a new channel for teachers to communicate with students and for students to probe topics in new and exciting ways.

Stephanie Norman of eLearning has some great ideas for using Twitter in schools. Education blogger Samantha Miller has posted a comprehensive list of 50 ways in which teachers can use Twitter in the classroom. Some of those have to do with classroom administration, such as tweeting out important due dates or links to class notes and study guides.

Other ideas revolve around Twitter-centric projects. For example, students can research different career paths by following Twitter accounts in those industries and communicating with professionals in that industry. They can also live tweet as they read a book. That way, students can see how each perceives the book differently. The class can also use Twitter to facilitate a conversation about the book.

Perhaps one of the greatest advantages of Twitter is its ability to connect people that otherwise wouldn’t be able to communicate. One high school French teacher has used Twitter to help her American students communicate with their counterparts in France. The two groups of students discuss daily life, culture, and the differences between American and French societies.

Perhaps the simplest way to use Twitter is to connect with your surrounding community. You can use your Twitter feed to announce important news and share student accomplishments.

One great example is the Twitter feed for the Johnston Community School District in Johnston, Iowa. They tweet regularly throughout the day and on a wide variety of topics. You’ll see updates about school news, individual students, and their sports teams.

One other thing that they do extremely well is communicate with the Twitter accounts of surrounding school districts. You could do the same thing. Maybe you could have a friendly hashtag competition with another school district before a big football game – #braggingrights or #BestofWest. Perhaps you could use Twitter to have a fundraising competition.

Schools need support from the surrounding community now more than ever. Neighboring schools, fellow league members, community media. Whether it’s for an upcoming school levy, a fundraising drive, or to recruit new students, it’s important that your message is heard. Twitter allows you to quickly distribute that message.

As part of your social media strategy and planning, you may decide that you want multiple Twitter accounts. Your schools’ parents organizations, athletic departments, band, your superintendent – each can have their own. The only major stipulation is that each Twitter account must have a unique email address associated with it. Simple enough.

3. Connect with parents about the good news...

You clearly know the struggle it can be sometimes to get important information to parents. Depending on the information, you may not be able to rely on students to pass along information to their parents. Also, parents may be so busy that they don’t always open email or traditional mail.

The statistics on the impact involved parents have on a student’s success at school are compelling, so as educators, it’s incumbent on you to do all you can to reach parents. These days, as more and more parents are “socially networked,” take the steps to use these channels to communicate with them.

Twitter provides another avenue to reach out to parents. Teachers can use Twitter to update parents on important test dates and assignment due dates. Students could live-tweet a field trip using a dedicated hashtag so their parents can see exactly what they’re learning. You could tweet out summer reading lists so parents can help their kids reach their goals.

Communication to parents can come from a lot more sources than just your teachers. Having other school staff members – coaches, counselors, principals, the lunchroom lady – is not only a great way to improve communication with parents, but promote the work others in your school are doing to fully develop your students.

The possibilities for parent interaction on Twitter are really endless. Basically any piece of information or link that is important for parents to read makes for good Twitter communications.

With school safety being of paramount concern, many schools are now beginning to use Twitter to streamline one of their most important tasks - communicating emergencies and other urgent alerts. Newburg Public Schools in Oregon encourages parents to follow the district on Twitter, but also to sign up for mobile alerts from the school district.

The mobile alerts are a feature that Twitter offers to select public agencies and organizations. Followers can sign-in to Twitter and choose to receive mobile alerts from their preferred organizations. When you send out an alert, they’ll receive it on Twitter, but they’ll also receive it as a text message. The key is to make it very clear to your students, parents, and teachers that this option is available. Newburg has a page on its website dedicated to walking followers through the alerts signup process.

This is especially important in areas where schools may have to deal with weather-related delays or closings. With mobile alerts powered by Twitter, your parents and teachers don’t have to get up, watch the news, and wait for your district’s name to scroll across the screen. They can just see your alert on their phone.

Beyond the teachers and key staff members at your school who could use Twitter to reach students, parents and the immediate school community, there are others within the larger school network who you can enlist to promote the school directly or indirectly. School board members, key vendors, consultants and proponents of your school can be engaged to, in turn, engage their respective audiences so that an even broader school community is reached.

Twitter is a great way to extend the school ‘network’ and generate interest and support on heavy topics such as tax levy issues and fundraising. But don’t forget about the ongoing news your team can readily share about bake sales, car washes, events, athletics and the like.

Of all the reasons to use Twitter at your school, the biggest one is to simply spread the good word. More than anything, Twitter is another avenue for you to share your vision for your district or school.

Starting with your students – the heaviest of Twitter users – to teachers, parents, school board members and the entire school community, your school can use this medium effectively. You’re doing great things in your schools. Your faculty is first-class. Your students are accomplishing amazing things. Why not use every possible – and popular – avenue to communicate those accomplishments and help achieve even better ones?

As is the case with all communications and engagement efforts, it’s helpful to plan and strategize a bit before you jump in. Assuming you’ve already involved the necessary communications and IT staff at your school and are in step with some larger communication/social media strategy, your next steps are pretty simple:

Remember, your goal is to get followers, but they won’t come overnight. Be patient. 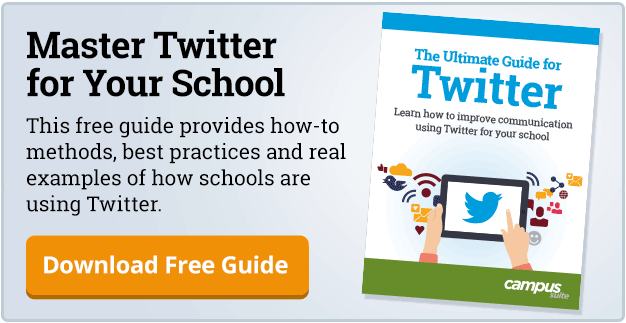 As co-founder of Campus Suite, Steve believes behind every great school is great communication. His tech savvy and passion for design fuel his desire to help administrators understand, embrace and seize the power of web communications.

How vulnerable is your school and family data?

Parent communication preferences are shifting faster than ever

Ready for the new era of school parent involvement?