On the heels of a recent webinar on using Google Apps for Education in your school, I wanted to follow up on the interest being generated by this hot topic.

Let’s face it: Google is everywhere, and you should be weighing if it ought to be in your schools in some fashion or another.

I’m not talking necessarily about some wholesale overhaul of your communications. Rather, even if you’re not familiar with the ease, depth and interoperability of Google apps in people's personal life, you should at least start thinking about how to introduce Google to your school.

Fact is, Google has become so mainstream with its ubiquitous search, maps, YouTube, Google Play – watch out iTunes, Beats – to NOT work it into the school setting would be turning a blind eye to this powerful force. Well entrenched in our personal lives, and the backbone of many businesses these days, Google is gaining some major momentum as the preferred way to share, communicate and collaborate

As Google becomes more pervasive in our lives, and schools look to technology to help improve engagement in the classrooms and the community, here are four pretty compelling reasons to consider using Google Apps for Education in your school.

1. Google Apps for Education is secure.

Some of the questions we received at our webinar were about the security of using Google for your school. Along with security questions, come reliability and dependability.

Yes, Google is in the Cloud. But you need to get past the notion of the cloud being some shaky, un-secure environment.

Yes, Google is a third-party database, but Google assures schools and the thousands of enterprises and organizations who run their business using Google apps that their data is as safe as can be.

Powerful spam filtering, 99.9% uptime, 30GB of storage per user, etc – there’s a tremendous, safe and secure upside to going with Google. Password protection is required, and, unless you “publish” information to the web, your data and documents will be safe and secure using the accounts and privileges set up by your school’s web administrator.

You also retain ownership of all your Google data and content.

On this whole fear of the cloud, you and your IT department needs to get past the notion of being nervous or wary that they can’t physically put their hands on the gear. Part of the problem with any new technology really, is the fear of upsetting the status quo.

I don’t know about you, but in terms of not having your servers and other equipment on site, I’d rather – and we do as a company that uses Google apps for our business – have Google handle all that. Been there, done that, and it takes a lot of resources to manage that and stay current with the technology. I’d venture to say it’s probably more secure than what you’ve currently have in place.

Archiving your accounts is something every school should be doing whether they use Google or not. Archiving is a school's mandatory hedge against the myriad legal issues that arise in today's digital world.

Archiving using many proprietary solutions, however, can be costly from a dollars and time standpoint. Google Apps for Education can eliminate many of the costs associated with maintaining your digital archives.

For email, chats, all documents (including all attachments), and any e-discovery issues, Google Apps for Education Vault features enable school administrators to search, retain, audit and export all data in your users' accounts. It provides a free safeguard against some of the looming legal challenges that may arise regarding an increasingly digital school environment.

Google just recently announced that its Vault app is now a free part of Google Apps for Education. They charge businesses and other organizations for this service.

3. Google Apps for Education is cheap

Perhaps one of the strongest arguments to give Google apps a spin at your school is that it’s virtually free. I say “virtually” for there are some hidden costs, but the tools are free.

You might have to pay for some other tools if you need them. Many of these are available, for example, on the Google Apps marketplace. If you are migrating data over, some third-party systems might require some additional costs.

But by and large, Google doesn’t cost anything. Google provides a huge pool of free training videos, documents, and hangouts to learn from and to get up to speed quickly. The template marketplace offers free templates, lesson plans, and resources for education.

The fourth and final reason – there are no doubt more reasons, but, you know, for the sake of blog space and all – you should begin using Google apps at your school, is that you will not be alone.

There are over 8 million students and teachers already using it.

If you’re school is one of those MS-dependent institutions, don’t worry. There are third-party migration services available in the Google Apps Marketplace. And while “power users” of Microsoft products might have some issues, or at least, a learning curve with Apps, there is a shift afoot from the Microsoft environment.

More and more colleges too are beginning to embrace Google Apps, so it makes sense that the K-12, charter, and private schools begin at least exploring Google Apps.

How to get started

Like with any technology change, don't be intimidated by trying out what Google Apps can do. Google designed a wonderful, integrated suite of products to help us all better communicate, share and collaborate. It's only natural that they be applied in the school setting.

The best way to get started with Google Apps for Education is to put together a pilot project at your school or district. I'm not talking diving in headfirst, but just see what it can do.

You might start with finding some people already familiar with Google docs, or those with at least a Gmail account. Assemble a team of teachers, students, staff and parents and just start with a few projects. Make sure there's someone from IT on your project. Here's a list of Ways for Schools to Get Started with Google Apps.

If you’d like to dive a little deeper into Google Apps for Education, check out this archived webinar recently conducted by the Campus Suite Academy and presented by Eric Fulkert.

If you have ways you're using Google Apps at your school, please let us know. 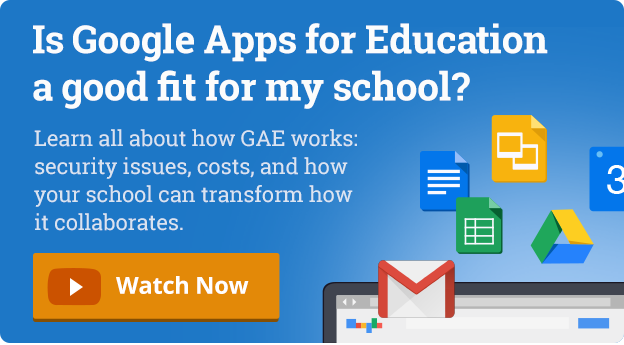